This is here for css purposes
Skip to Main Content Skip to Side Menu
Home › About › Senior Management › Paul Reid, CFA, CPA, CMA 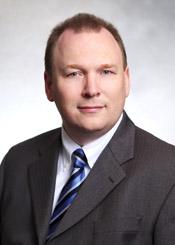 Paul joined the MFDA in 2003 and is responsible for the accounting, human resources, information technology, and facilities functions. Paul started his career in the securities industry at Strategic Analysis Corporation as a securities analyst and was responsible for researching stocks listed on the TSX Composite Index. He was later promoted to Vice-President of Canadian research where he shifted the focus of the company from institutional research to research provided to individual investors. He later became Chief Operating Officer where he oversaw all operating aspects of the company before joining the MFDA.

Paul is a CFA, CPA, CMA, and holds a Bachelor of Commerce degree from Concordia University in Montreal. He has also appeared in articles in the Toronto Star and Globe and Mail, as well as in interviews on CTV National News and CBC Radio.